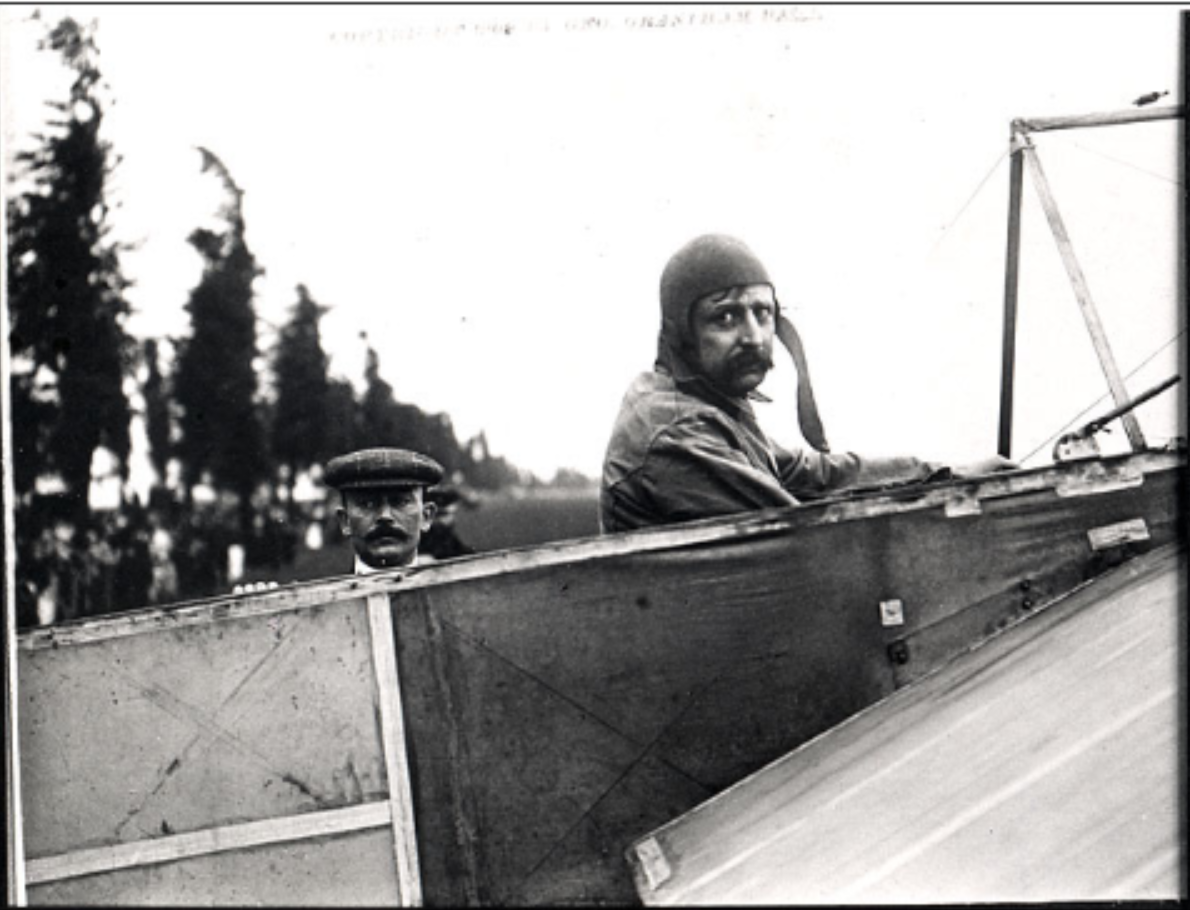 Louis Blériot sitting in his Bleriot XI at the start of his cross-Channel flight of 25 July 1909. NASM-2B02568, Smithsonian National Air and Space Museum Archives

Early in the morning of July 25th, 1909  Louis Blériot (1872-1936) crossed the English Channel, a distance of 22 statute miles (36.6 km) from Les Barraques (near Calais) to Dover. There had been longer flights and further flights, but the conque st of the Channel by air was a sensation and brought Blériot instant fame. Blériot had been a successful manufacturer of automobile headlamps who became fascinated by aeronautics in starting in 1901.  He brought his latest aircraft to Les Barraques, the Type XI, a little monoplane fitted with a 25-horsepower, 3 cylinder Anzani motor. The London Daily Mail had put up a £1,000 prize for the first airplane flight across the Channel, and Blériot was competing with two other aviators, Hubert Latham and Charles de Lambert. Lambert, who received his training from Wilbur Wright, had been injured in a test flight and was out of the running. Latham had already attempted a Channel flight – he had made it halfway across the Channel in his Antoinette IV monoplane on July 19 when engine failure brought him down in a forced landing in the sea.  On the morning of the 25th, Latham was ready for another attempt with a replacement aircraft, but was still fast asleep when Blériot took to the air. The flight took 36 minutes, 30 seconds, and was not without suspense. Blériot had also been injured in a test flight and was in pain with a badly injured foot. The photograph above, taken just before the flight, shows the strain that Blériot was under. It began to rain, and Blériot feared that the moisture would cause the Anzani to pack it in. The weather became turbulent, and visibility declined; he later recalled thinking – I am alone. I can see nothing at all. At Dover, the wind nearly caused him to crash, and his landing gear and propeller were damaged. But he had made it, and he was declared the winner. It was the first successful flight by an airplane over a large body of water. Hubert Latham was not happy when he finally woke up. Blériot became a hero, celebrated on both sides of the Channel. And his Type XI became a best seller – many were produced by the Blériot firm, others by foreign licensees. [ https://airandspace.si.edu/stories/editorial/bl%C3%A9riots-cross-channel-flight ]