Tone was appointed to a Commission as temporary Second Lieutenant and posted to the General List for duties with the Royal Flying Corps. 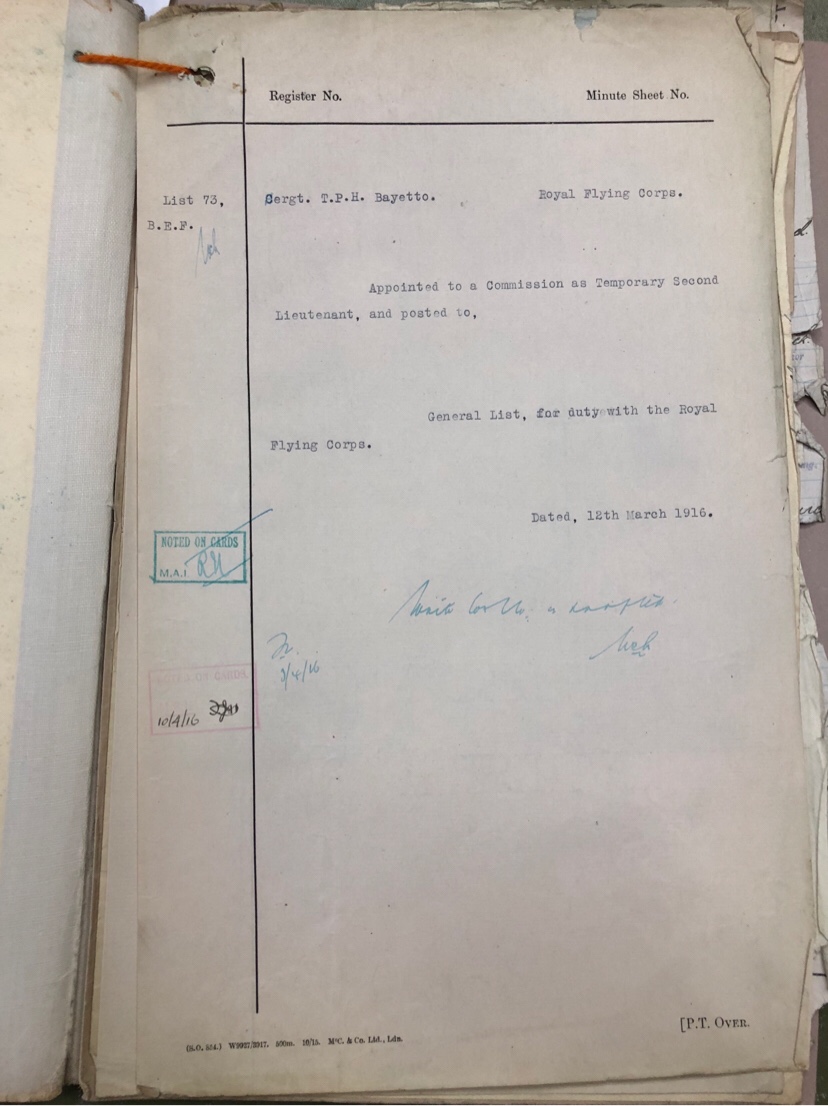 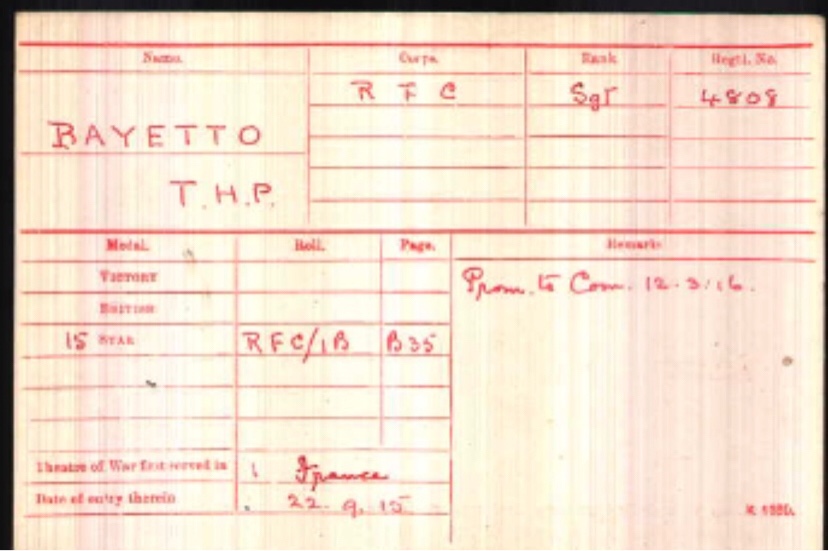 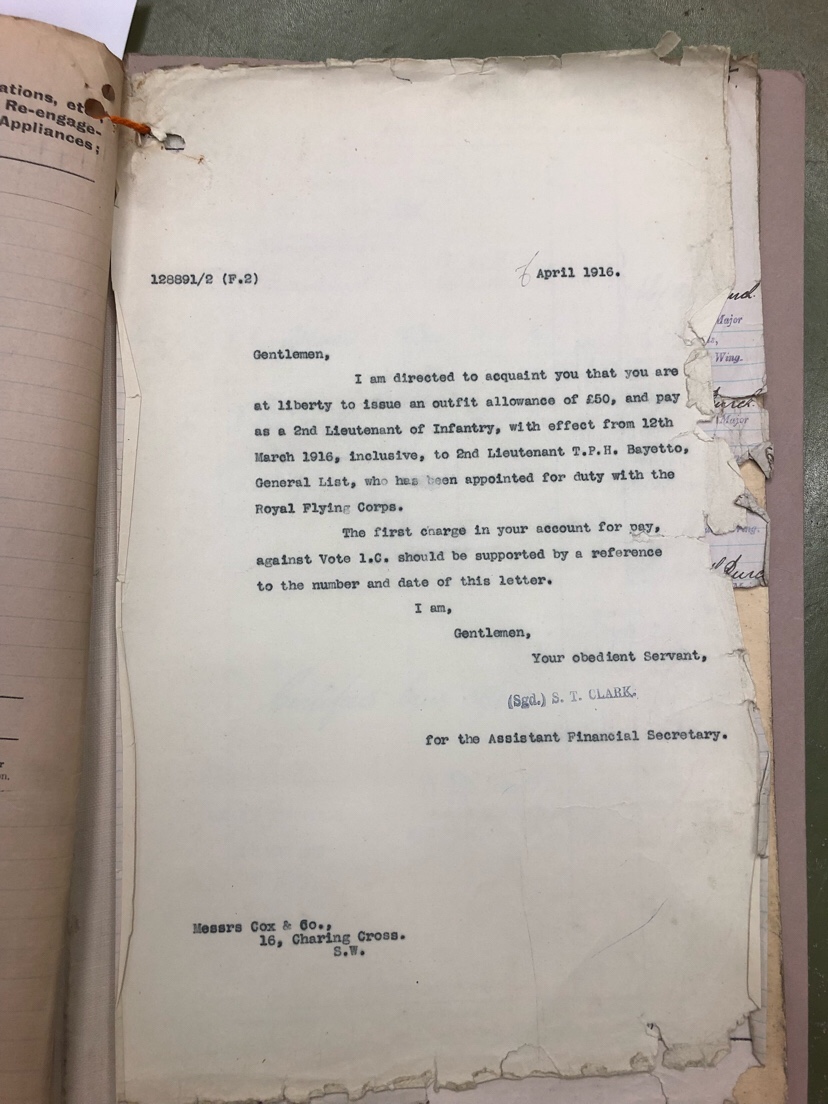 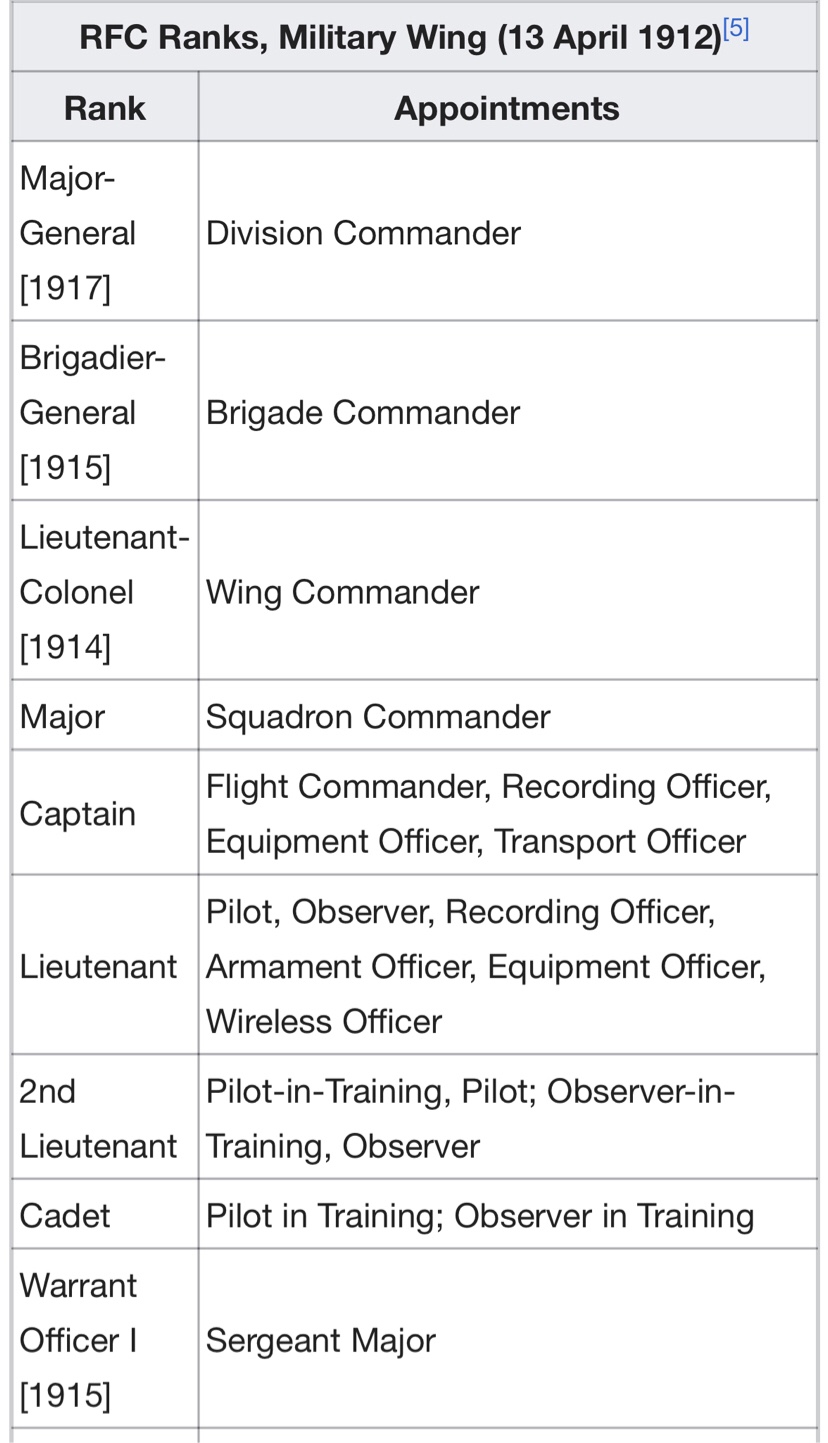 Immelmann:  “At last some more arrived on March 2nd, I went up that day to take over the air barrage between Lens and Arras. I was about 2200 metres up when I suddenly saw an English biplane heading for me. It was about 2400 metres up, and close behind it, about 100 metres away, there was a monoplane. A Fokker I thought, and rejoiced at the idea that it was going to shoot the Englishman down. But it did not shoot. I took my glasses and saw (by the markings) that it was another Englishman. The next moment the two of them came down on me, firing as they dived. Being 200 metres below them I was defenceless. I escaped their onslaught by a nose-dive of 100 metres and flew a bit to westward while the Englishmen were flying east. Then I went into a swift turn, which brought me behind my opponents. They were 2200 metres up and I 2100. Then the pursuit began. The two of them were flying straight for Douai the distance between us increased continually. My engine was running badly. I thought it was most necessary to climb, but the Englishmen climbed as well. The two of them were up to about 3000 metres over Douai, and I was 2800. It was absolutely imperative for me to get higher if I meant to attack them, or to at least reach their height. I considered whether it would not be better for me to land, for I could do simply nothing with my engine. The two flew on towards Valenciennes, finally they looked only as big as flies. I got all the climb I could out of my engine; as there was no hope of overhauling them, I meant to cut them off on the way back. I succeeded in that and met the couple half way back from Valenciennes and Douai. I was now at 3200 metres up and they were 3100. Then the fun began. The English biplane led followed by the monoplane which had a device for shooting through the propeller that seemed similar to my own. I put my machine behind the monoplane and began to shoot. He on his part tried to get on to my neck. He planned to put himself behind me by means of a wide turn, and I used the moment to attack the biplane, keeping one eye on the monoplane, I shot at its companion everything I could get out of my gun. In this way I forced the biplane down to 2500 metres, whence it descended in a steep glide and landed. It was not advisable for me to turn on my other enemy, the monoplane after that, for firstly I could not make up the lost 500 metres of height with my bad engine and secondly I had a gun jam. So I let the monoplane buzz off in the direction of Lille and went home. News had already come through by telephone that an Englishman had landed at Souain [This not thought to be right and should be Somain ]. After receiving congratulations on all sides, I asked for a car. As chance would have it, Lt Claus, an old friend from the cadet corps, had come along to pay me a visit while I was still in the air. We drove off to the landing place together. The pilot (Lt Palmer) had been bandaged and was sitting in a car. He had a wound to his foot. On a stretcher close at hand was the body of the dead observer (Lt Birdwood). There were many bullet wounds in it. The machine had landed undamaged; it was dismantled and sent to our section. The machine carried two guns. The pilot used one of them to fire in front, just as I do, while the other was manned by the observer in the rear. The second machine gun was missing, it had fallen out of the dead observer’s hands and was found several kilometres away from the landing place. The Englishman said “Well, if I have been shot down, I am at least glad that Immelmann is my conqueror”. We then drove back, to the accompaniment of cheers from the assembled crowd. The machine was quite a new type, making its first flight at the front.” [From Immelmann, The eagle of Lille].